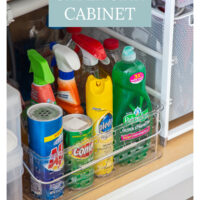 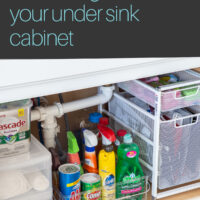 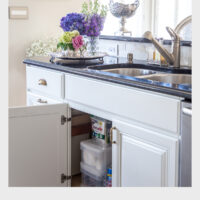 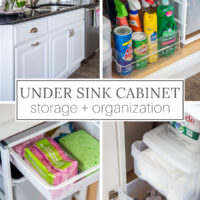 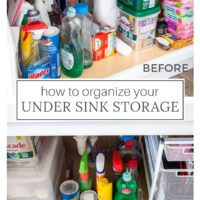 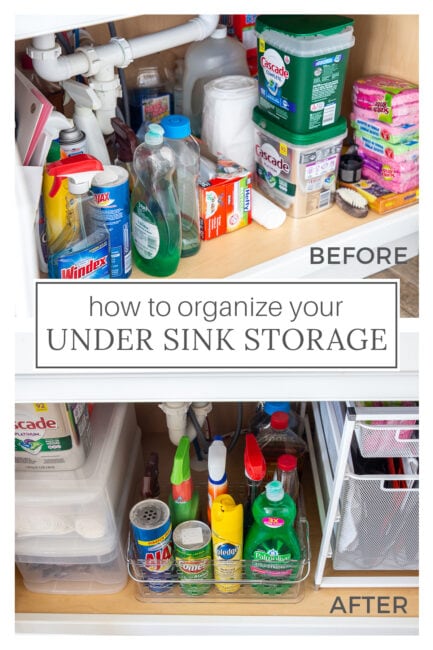 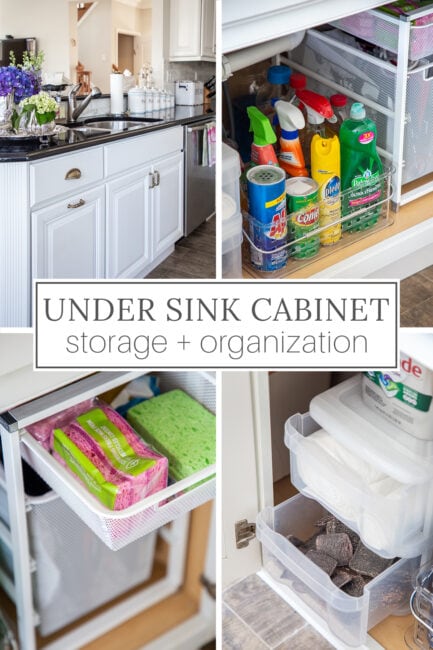 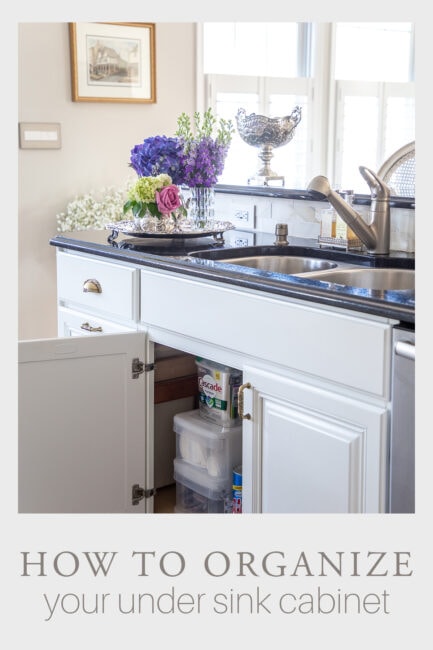 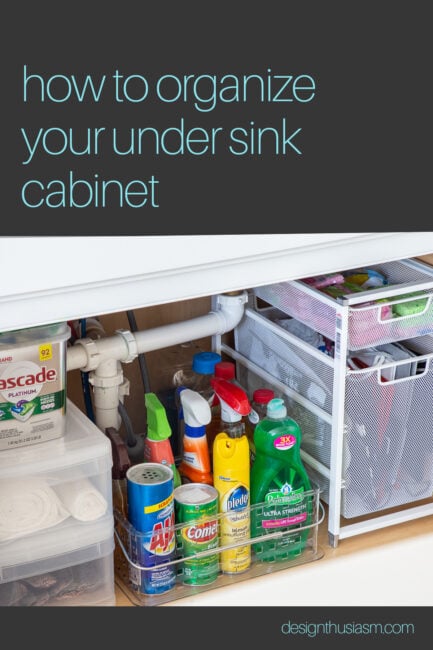 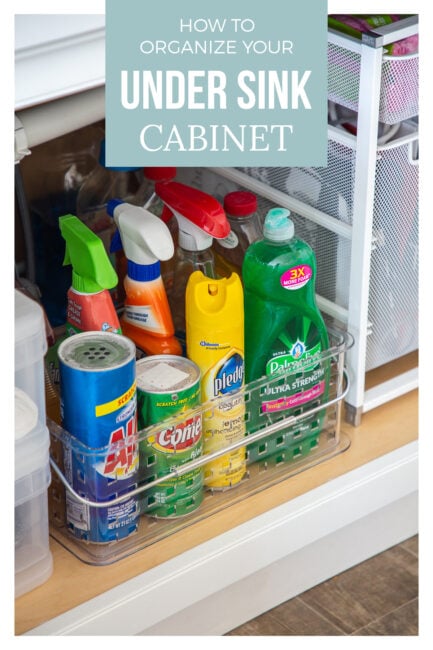 In this post: The most effective kitchen organization begins in the most often used places. Here are simple ways to declutter your under sink storage.⇒

Hubby and I had another one of those conversations.

As the boxes of containers arrived and I began to unpack them, he looked on shaking his head, utterly convinced that I was about to make it way harder to access the things we needed.

It’s a simple conflict of perspectives, but I will never understand how someone can think it’s easier to find things that are all thrown in together than to separate them into neat compartments.

You can see the failure of such an amorphous storage system in the “before” picture below.

This is, in fact, for me the essence of organization.

And so when it comes to a space as cavernously undefined as an under sink cabinet, it’s all about creating makeshift zones and then assigning them compartments.

There are no shelves or built in dividers which is what makes such a space so universally unkempt.

To win the war of under sink storage, you have to conquer the division of space.

And that’s what led me to the hammering-fest in our front hallway that day I unpacked the boxes.  Perhaps this unabashed display of meager DIY prowess is what made him doubt the outcome.

But I had planned.

And I had measured.

And I was fairly certain it would work out exactly as I envisioned.

Except for that one potential foil that could throw the whole plan out the window. Which is why I was really eager to get the pieces put together. You see, the key unit I had purchased was a tight fit and it was entirely dependent on an open area  falling exactly where a bulge in the under sink pipe protruded.

If this unit didn’t fit, I’d have to go back to square one with the plan.

It was tempting to start with the containers on the other side, just to achieve a win. But I really needed to know if the main unit fit, first. So I hammered away and with each strike of the hammer, I saw hubby’s expression go from complete disinterest to bemused doubt to full-on skepticism.

In fact, ultimately, he was the one who helped me overcome a spacial conundrum and with a little compromise, slipped it into place. But more on that later.

Now that you know the plan essentially worked, let’s look at the arrangement and the individual pieces that added up to a perfectly organized under sink cabinet.

As with our kitchen pantry refresh, I spent a lot of time designing the plan. The idea was to ensure that the containers organized the items we wanted to store, rather than buying containers that fit the space and then trying to fit our supplies into the available storage.

On the left side of the cabinet, I placed 2 pull-out plastic drawers. I could’ve fit a third stacked drawer, but I preferred to leave space on top to keep our dishwasher pods. I might still add a third drawer and decant the pods, much as I did the steel wool in the bottom drawer. Why we had 4 boxes of steel wool, I will never know!

The upper drawer holds our kitchen garbage trash bags, pulled out of their boxes and kept orderly in rolls.

“20 Ways to Update Your Home for Your Changing Lifestyle”!

In the center section I placed often used cleaning supplies. A simple plastic container keeps them neatly corralled, and the handle is a bonus, allowing the entire unit to be removed and carried to clean another room. I’m pretty adamant about banishing loose items from the cabinet, but I do have a couple of large refill containers behind the bin. This is the area I will have to be vigilant about not letting it get out of hand.

Next we come to the prize unit, the one that required some hammering, along with agility and maneuvering to fit into our cabinet. I had measured carefully before ordering and I knew it would be tight. But my concern was the width and I hoped the protrusion of pipe would fall between the bars. In fact it did and I thought we were home free, until I realized the little “feet” on the bottom lifted it just enough to create an obstruction at the top that we needed to snake the unit under.

These are strong inflexible pieces that I was trying to accommodate, but I knew if we could just get it under the pipe, it would fit once straightened out. Hubby was able to ease it in, but I had to give up using the top piece that would create a clean finish and could function as a shelf.  In a taller cabinet that would be a nice benefit, but we have no room to place anything on it anyway, so we were good to go.

The key to organization of a cabinet such as this is creating vertical storage to avoid wasted space and that’s exactly what this unit provided. Add to that convenient pull-out access and you have the perfect set-up. Depending on your needs, you could use several of the shallow trays, but I opted for only one on the top rung, and this is where I keep sponges and other little items like scrub brushes and the like.

I chose one deep bin for the bottom of the unit to store the melange of shopping bags I re-use over and over and you’ll notice, if you remember my aversion to plastic bags, that I keep only one giant one for those rare occasions when it might come in handy.

In addition to vertical storage, the other key factor to organizing such a large undefined space is being able to access things at the back of the cabinet.  This is why pull out drawers are essential to ensure it’s easy to see and reach everything in the cabinet.

I think I finally convinced hubby that this system makes life easier. The containers are not there for show, but they actually make things simpler to get to. Instead of reaching over products and knocking everything over, you can see exactly what’s in the cabinet and access it with far less effort.

Not shaking his head so much anymore, huh?

DON’T FORGET TO PIN THIS!

To get the look, click on the items below for direct links to the products. Where actual items were no longer available, I’ve provided similar options. If an item is out of stock but may be restocked, I left it on the list.

Have you visited the Designthusiasm shop? Click below to shop my favorites, my Instagram and my Amazon shop. Enjoy!!

Are you following Designthusiasm on social media?  Please join us at the links below: 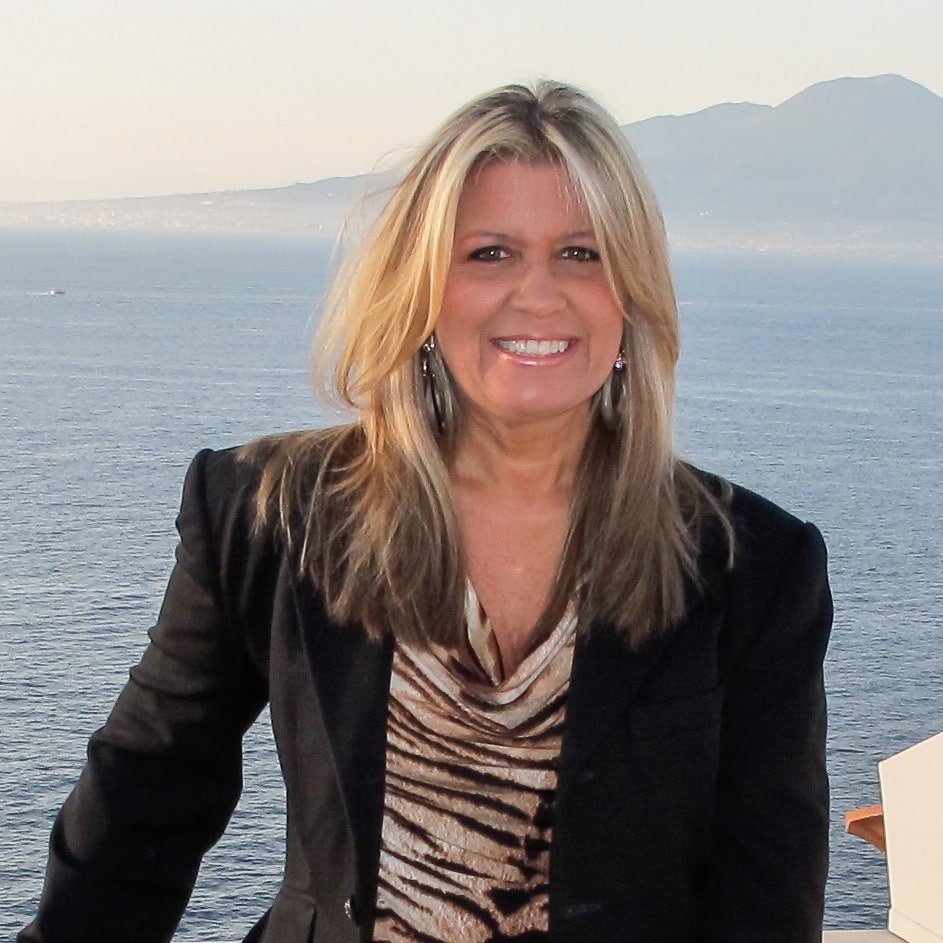 I’m Lory, the creator of Designthusiasm, a blog that celebrates little luxuries and beautiful design! For my story see my ABOUT page.
Thanks for visiting! 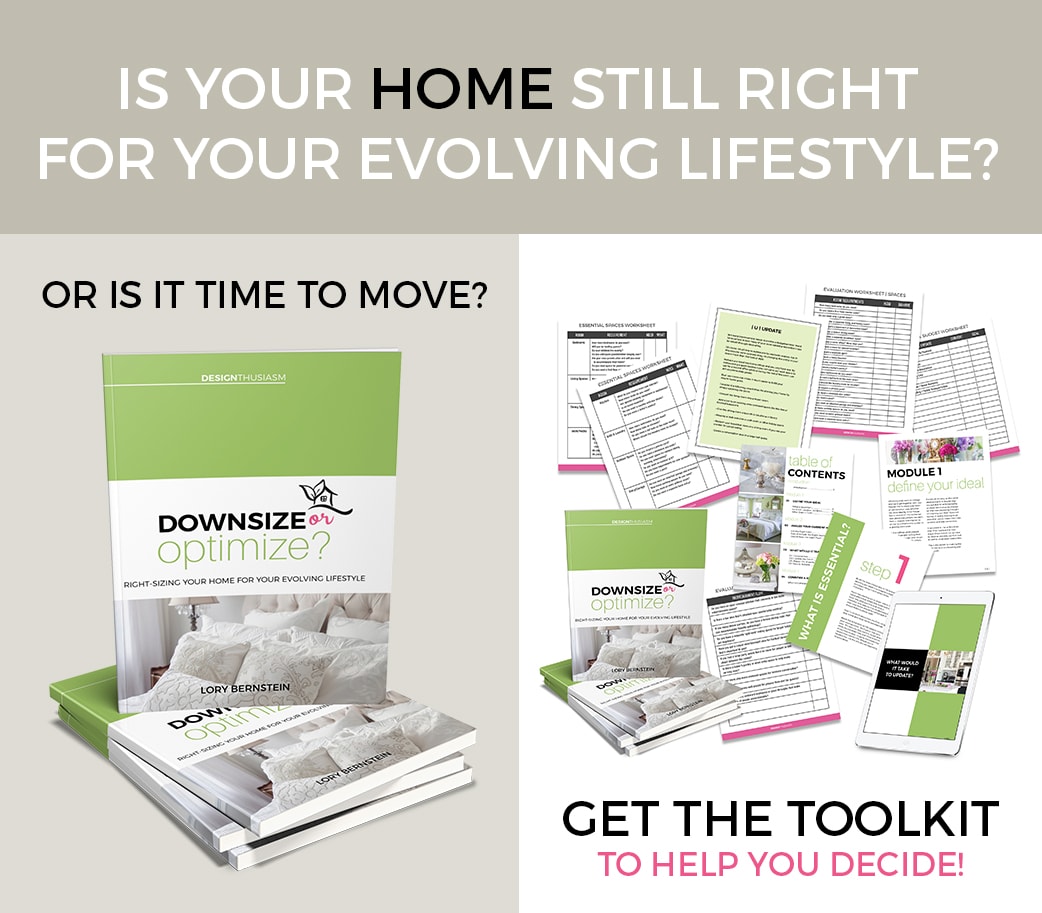